The EVP Perspective of The Los Feliz Murder Mansion

I think every investigative team has a local bucket list, a group of places they hear about or stumble upon during their travels that fascinate the hell out of them and, regardless of whether or not they can get in to investigate, rest assured that these places are always on their mind leaving them open to every tidbit of information that might cross their path. Recently, one of our places resurfaced with interesting developments.

I came upon the place known as “Murder Mansion” in Los Feliz one night while researching the crazy life and former home sight of actor Errol Flynn. One blog led to another and, as I was wending my way along the internet current, I crossed the path of a house that looked familiar. Apparently this house had been a curiosity to many urban explorers and paranormal enthusiasts before me, and yet, upon talking to my teammates and our friends, no one had ever heard of it.

The Los Feliz property sits atop a hill on a quiet cul de sac in a neighborhood where houses sell for millions of dollars. Its nickname makes the tragedy that occurred there obvious. On December 6, 1959 Dr. Harold Perelson bludgeoned his wife, asleep in their bed, to death with a ball-peen hammer. He then went through the jack and jill bathroom to his daughter Judye’s room and attempted to do the same to her. She suffered a glancing blow and managed to flee the house.

Awakened by their sister’s screams, the younger children were told by their father that they were having a nightmare and to go back to bed. As Judye ran to the neighbors for help and the police were called, Dr. Perelson returned to the upstairs bathroom where he took a concoction of drugs which killed him by the time the police arrived at the scene.

The story of affluent 1950’s family life taking such a tragic and fractured turn is fascinating in and of itself. But what happened to the property afterward truly adds to the macabre fascination. A year after the murder-suicide the property was sold in a probate auction to a couple from Lincoln Heights who never moved in. In fact, it remained stagnant, a time capsule of the life that ended that cold night in 1959. Our first visit revealed the same sight we found pictured online. Through dusty living room windows you could see much of the original furniture still in place while other rooms were filled with magazines and junk dated years after the murder. Even as the property passed to the son of the couple who bought it decades ago, it was left to itself, used for little more than storage.

Our first visit there, Brian stayed in the car while Jamie and I made the trek up the many stairs to the house. The energy was incredibly stagnant. Inside we saw the now familiar mustard living room chairs and the loom still in the corner. And though we saw no Christmas tree or presents, there was indeed, a jumble of christmas wrapping paper and bows. 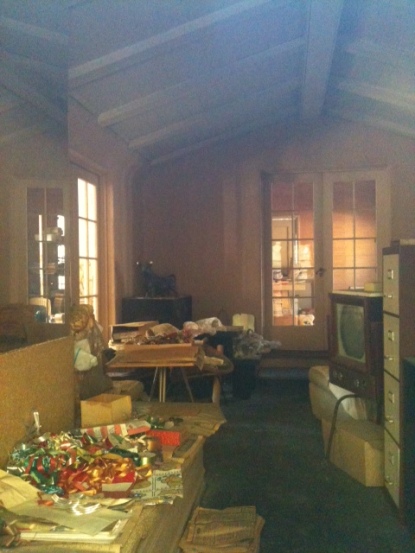 Knowing the local residents were fed up with tourists, we tried to keep our visit quiet and brief. But we couldn’t leave before getting a feel for what might be going on with the house spiritually. After all, the energy of that horrible night was essentially locked up and incubated over a period of decades.

Sitting on steps beside the driveway as it wound behind the house, we took a few moments to be silent and still. And it didn’t take long for Jamie to have a reaction the likes of which she had never experienced. Even after personally noting that the energy of the house was not right, the fear and the pain that Jamie was connecting with was difficult to watch. The skeptic in me jumped to disbelief at the sight of tears and trembling even though I ~knew~ she was no huckster. I didn’t know what to do for her or how to help. I just did my best to get her to talk about what she was experiencing hoping that putting it into words would make it feel less urgent or personal.

Though it was possible that Jamie was picking up on a general imprint of the past, their was the feeling that the energy was too alive, too current, to be as simple as a scar left on the location. We concluded that even though Judye survived the attack, the fear, the pain, the panic she experienced that night was still there, desperately chasing down help, needing to be heard. It took Jamie a while to gather herself. And even after we made it back down the hill and drove off, the reaction lingered. For me it was an interesting experience, viewed through the lens of detachment that so often affords me an ~appearance~ of calm when things get crazy during investigations. 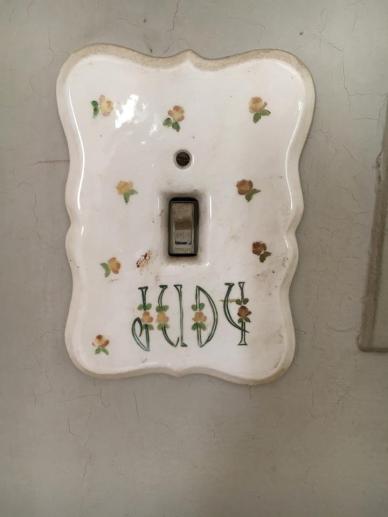 Although I trust in my investigating partners, the nature of our experiences always leaves me wondering about the parts that make up the whole. What part is the environment? What part is due to the events of the past? How strong is that which lingers there? And how sensitive or even over-reactive was might we be? The new developments in this story led me to another personal account that bore a striking resemblance to Jamie’s. For me, it was a step towards validation.

…Just then, Jennifer felt “something ominous.”

Maybe it was the same feeling that drove away the homeless, who once tried to shelter there many years ago, but fled citing unsettling chills, mystery footsteps, unholy noises at night. Maybe it was the feeling described by neighbors in a newspaper that they were being “followed.” Adrenaline squirted in her veins now. She found the concrete steps again. Her footsteps retraced the escape route taken by one of the doctor’s daughters, who fled the house soaked in blood. “I imagined her running away from her crazy dad,” Jennifer says, “and just how awful that must have been…I almost got the same feeling.” She was running now, her hands covered in decades of black dust. She cared no longer for answers, for adventure, or her bucket list. “Oh my gosh,” she thought, “I can’t get away from this house fast enough.”

Perhaps this account is sensationalized. But given what I witnessed during our first visit to this house, it is not too far off from the truth.

It was some time before we returned. My curiosity piqued last year the night before the team was supposed to head out to Downtown L.A. and on the way back, I asked if Jamie and Brian wanted to take a look and see if anything had changed. Much to my surprise, they said okay. This time, we pulled up to the house but didn’t get out of the car. Sitting in the back seat and peering up that dusty hill, the house remained visibly unchanged. But it felt different. I was reluctant to say it, but as we began discussing it, I mentioned that the energy was moving again. The house felt excited, like someone was cleaning it. Perhaps the owner had finally decided to sell. I had no proof, of course, but I voiced my thoughts in the safety of their company just in case I was right. And yesterday, I discovered that I wasn’t wrong.

It turns out that the owner died last year. And the house has been cleaned out and put up for sale. The time capsule of despair and life lost has been opened and emptied and, judging by the feeling I had during our last visit, the house is happy about it. Many speculate that the it is a complete tear down. As one neighbor put it:

“You can’t have a house sit empty for 50 years and not expect it to fall apart.”

As a history and architecture buff, the thought makes me cringe. What a shame an estate from the 1920’s would suffer such a dark history and meet its demise as a result. But I feel sure that whatever remnants were left behind from that terrifying night are happy for their release.

If you find your curiosity for this story is not satiated, please check out the links below amongst which are Jennifer’s original blog post containing many pictures from before the house was cleaned and a link to a series of pictures taken since the clean out. And check the  link to a STELLAR article by Jeff Maysh detailing the events of the murder-suicide and containing interviews from the neighbors that knew the Perelson family.

Written By: Heather of EVP

A visit to the murder house in Los Feliz. BUCKET LIST!